It's hard to be mad at your daughter... 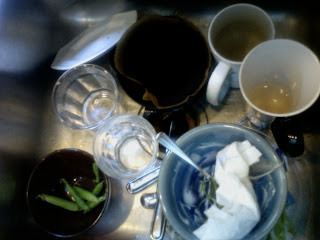 ...when her reason for not doing the dishes is that she was reading Billy Collins aloud with her best friend.
Posted by Brenda Bowen at 9:03 AM 7 comments:
Email ThisBlogThis!Share to TwitterShare to FacebookShare to Pinterest 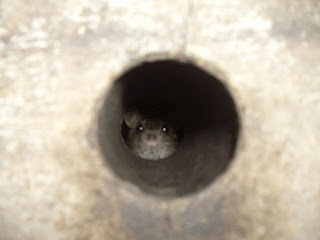 For a moment there today, I couldn't remember whether it was "bated breath" or "baited breath." Just for a moment. Then I remember bated/abated, and realized it was the former. But I had already googled it, and thence came upon this little ditty by a poet unknown to me, Geoffrey Taylor. I could not resist pairing the poem with a photo pared from the Facebook page of author/artist Brian Floca, from his celebrated "Wildlife Photography, 23rd Street" series.

Clever, cruel Sally! We could use her on the F train.
Posted by Brenda Bowen at 11:13 PM 5 comments:
Email ThisBlogThis!Share to TwitterShare to FacebookShare to Pinterest
Labels: Our Fair City, Picture books, Poetry Friday 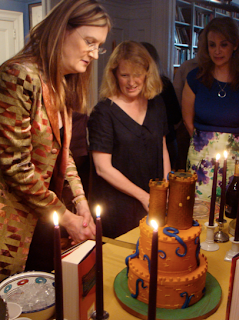 I was a bit slow to blog about a book party the Bunny hosted for her erstwhile author, Jennifer Finney Boylan, whose terrific new book, Falcon Quinn and the Black Mirror, is now happily published by Katherine Tegen Books at HarperCollins. I was a bit slow because I thought perhaps Betsy Bird would blog about it in her own sparkling and irresistible style, and now she has.

Here's one secret even Betsy Bird didn't know: When I heard that certain well-known authors were planning to attend the affair, I looked around the house for the copies of their books I knew I had. But they were almost all absent. The Richard Russos were in place, but the Cecily von Ziegesars were in storage; my two copies of Running With Scissors -- hardcover -- had been lent out and never returned; and my Jennifer Finney Boylan backlist was at my sister's. (I'll admit I did not have any copies of the plays of Edward Albee. Then.)

I figured if I were an author and I came to someone's house, a house pretty much filled with bookshelves, the very first thing I would do would be to scan the shelves, oh so nonchalantly, for my own name. And I could not bear to have these authors look on my shelves -- shelves that had once held their books, most bought at retail -- and find themselves missing.

One of the glories of living in New York is that there are bookstores all over the place. So the day of the party, I high-tailed it uptown to an indie, and downtown to a chain and a used, to pick up copies of what I was missing. I slipped them into their rightful places (alpha by author, except for the plays, which went on the slender Drama shelf), about half an hour before the first doorbell rang. Then I took a belt of the Sicko Sauce, and declared that the party could begin.

Did the writers scan the shelves? I'll never know. But I was happy to look up and see those names, and those books. Parties come and go, but words endure.

Many thanks to A.B. for the photo, and to HarperCollins for underwriting the affair.
Posted by Brenda Bowen at 1:28 PM 7 comments:
Email ThisBlogThis!Share to TwitterShare to FacebookShare to Pinterest
Labels: Bookstores, Our Fair City, The Deserving 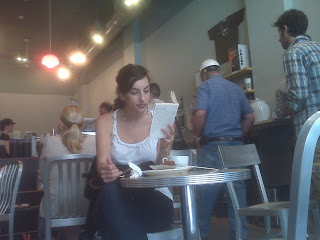 So they can spend their mornings reading in West Village cafes.

And she was reading Freud. In French.

Because they can read Freud in French. Or meet people who do.
Posted by Brenda Bowen at 4:25 PM 3 comments:
Email ThisBlogThis!Share to TwitterShare to FacebookShare to Pinterest
Labels: Our Fair City, the Commute, the sub-conscious 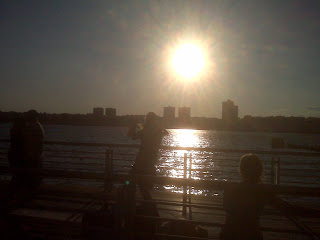 I know magazines are folding and newspapers will soon cease to exist, but what will ever replace the little gems of meteorological narrative non-fiction that appear in the upper right-hand corner of the New York Times each day? Here's what the Late Edition told us this morning, and so far it's all come true:

The world is gushing chaos, but somehow gentleness survives.

(The photo was taken on my way home from work today. Tango by the River at sunset.)
Posted by Brenda Bowen at 6:15 PM 6 comments:
Email ThisBlogThis!Share to TwitterShare to FacebookShare to Pinterest
Labels: Acts of God, New York
Newer Posts Older Posts Home
Subscribe to: Posts (Atom)