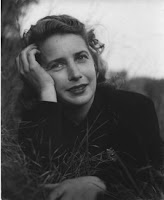 Margaret Wise Brown deserves the laurel leaf crown for many reasons -- the last line of The Runaway Bunny, the real moths in the pretend Little Fur Family, Maine -- but the prime reason is this: She once staged a literary tea on the steps of the New York Public Library in defiance of Anne Carroll Moore. Margaret was defiant because Miss Moore had chosen not to include Miss Brown's books in the NYPL's children's collection. Leonard Marcus tells the story beautifully in his wonderful book, Awakened by the Moon, but, in a nutshell:

Miss Moore hosted an annual tea party at the main branch of the library for authors she supported. Margaret and her adored editor, Ursula Nordstrom, set up a tea for themselves on the library steps, which meant that all the included authors and publishers had to step right over the refusées in order to enter the event. Very naughty. Very Margaret.

The 100th anniversary of Margaret Wise Brown's birthday is Sunday, May 23. I'll bring cupcakes if you'll come out to sing Happy Birthday on the steps of the New York Public at 2PM. Isn't it the least we can do for her? And wouldn't she have loved it?

Posted by Brenda Bowen at 10:09 PM
Email ThisBlogThis!Share to TwitterShare to FacebookShare to Pinterest

For real? I'm game! (Being outside I can bring the dog, right?)

Oh, I love Margaret Wise Brown! So wish I could come, but I'll sing along all the same. Thanks so much for this post.

A Tea Party event I'd want to go to!

Tea sounds just wonderful, and that story makes me love MWB more than ever.

Monica -- For real. Bring the dog. Bring the 4th graders. It will be an event. Brattcat -- if you're prowling anywhere nearby, we'd love to have you on those steps. Everyone else: Sing Happy Birthday to Margaret at 2PM on the 23rd and we know you'll be with us in spirit.

Everyone should sport garish hats and carry a porcelain teacup. If only I lived in New York...

In any case, I will be there. This sounds like a hoot.

Oh, that's a good idea! We will have a cup of tea in northern Vermont, and sing Happy Birthday to MWB. But I would like to have a NYC cupcake.

And if an author did that today, they'd be shunned as *difficult to work with* and thrown into the bubbling green bowels of adverbs!

Hi Brenda,
I met you at the OC Agents Day. I wish I could sing Happy Birthday to Margaret with you on the steps- I'll be singing from LA on the 23rd, she deserves a bicoastal celebration!
Rosalind Oliver (the "Pilar" girl:)