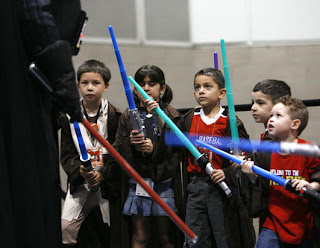 As a 30-something who once hung from a clothesline, upside down, and pretended her hand had been cut off by Darth Vader, your post made me misty-eyed.

Here's to introducing a new generation to the original Stars Wars trilogy...and introducing them to the joys of imagination, creativity, and reading.

A friend sent me this way after seeing your post. It's so true. I've been waiting to give my daughter Star Wars for a long time--waiting until she was ready. I was six when the first movie came out and wasn't allowed to go (though my older siblings went).

She knows pretty much nothing about the movies (this seems unbelievable, since my husband and I are huge fans). She knows enough to know that Darth Vader is "the bad guy." I blogged about her "meeting" him here: http://sandmore.blogspot.com/2008/05/random-photo-time.html

I suppose now that she's eight, it's time! I wonder what she'll think? Good thing we have the original version on VHS and a VCR that still works!

This is a fairly inane response to a super post, but that's never stopped me before....

Every now and then, I'm struck by the realization that once upon a time, names like "Scrooge" and "Sherlock" were just NAMES, without any particular connotations about stinginess or intelligence. (When I was a kid, I actually thought "Sherlock" was another word for "detective".)

It really is amazing how deeply characters and stories can ingrain themselves into our collective consciousness.

Sarah -- I share your feeling utterly. I just reread "Dr. Jekyll and Mr. Hyde" and was awed by the idea that it wasn't so long ago that those characters didn't exist. I feel the same about Peter Pan. And the revelation is, of course, that those iconic characters can only come out of their own time. They're archetypes, I know, but they take the place of any iteration of the same archetypes that preceded them.

There was no moment before Stevenson's that anyone could have created Jekyll and Hyde; no one but Dickens could have given Scrooge so much relevance; no time but 1977 when Star Wars could have emerged from technology and imagination. Every once in a while, there is something new under the sun.